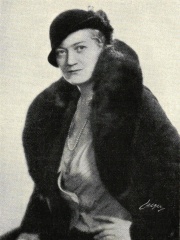 Bodil Ipsen (30 August 1889 – 26 November 1964) was a Danish actress and film director, and is considered one of the great stars of Danish cinematic history. Her acting career, which began in theater and silent films, was marked by leading roles in large folk comedies and melodramas. However, it was as a director that she was most influential: directing the first Danish film noir and making several dark psychological thrillers during the 1940s and 1950s. Read more on Wikipedia

Since 2007, the English Wikipedia page of Bodil Ipsen has received more than 21,960 page views. Her biography is available in 15 different languages on Wikipedia making her the 2,506th most popular actor.