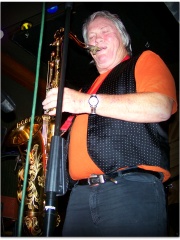 Robert Henry Keys (December 18, 1943 – December 2, 2014) was an American saxophonist who performed with other musicians as a member of several horn sections of the 1970s. He appears on albums by the Rolling Stones, Lynyrd Skynyrd, Harry Nilsson, Delaney & Bonnie and Friends, George Harrison, John Lennon, Eric Clapton, Joe Cocker and other prominent musicians. Read more on Wikipedia

Since 2007, the English Wikipedia page of Bobby Keys has received more than 412,916 page views. His biography is available in 15 different languages on Wikipedia making him the 1,543rd most popular musician.