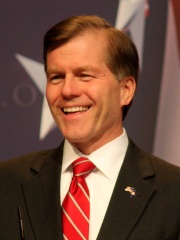 Robert Francis McDonnell (born June 15, 1954) is an American politician and lawyer who served as the 71st Governor of Virginia, from 2010 to 2014. A member of the Republican Party, McDonnell also served on the executive committee of the Republican Governors Association. McDonnell was a lieutenant colonel in the United States Army Reserve. Read more on Wikipedia

Since 2007, the English Wikipedia page of Bob McDonnell has received more than 662,203 page views. His biography is available in 21 different languages on Wikipedia making him the 14,283rd most popular politician.

Among people born in 1954, Bob McDonnell ranks 445. Before him are Abida Parveen, Jeffrey Ashby, Elizabeth May, Judith Weir, Mike Rounds, and Quinn Buckner. After him are John Cygan, Cathy Carr, and Ziad Fazah.