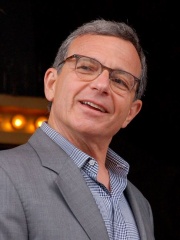 Robert Allen Iger (; born February 10, 1951) is an American media executive and film producer who is Executive Chairman of The Walt Disney Company. He was CEO from 2005 to 2020. Before working for Disney, Iger served as the President of ABC Television from 1994 to 1995, and as President/COO of Capital Cities/ABC, Inc. Read more on Wikipedia

Since 2007, the English Wikipedia page of Bob Iger has received more than 3,965,986 page views. His biography is available in 28 different languages on Wikipedia making him the 241st most popular businessperson.