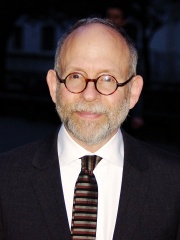 Robert Elmer Balaban (born August 16, 1945) is an American actor, author, producer,comedian and director. He was one of the producers nominated for the Academy Award for Best Picture for Gosford Park (2001), in which he also appeared. Read more on Wikipedia

Since 2007, the English Wikipedia page of Bob Balaban has received more than 1,568,792 page views. His biography is available in 24 different languages on Wikipedia making him the 2,929th most popular actor.

Among actors, Bob Balaban ranks 2,905 out of 8,832. Before him are Peter Jacobson, Theresa Russell, Elisha Cuthbert, Michael Vartan, Martin Ferrero, and Nicol Williamson. After him are Sergio Castellitto, Jean-Marc Barr, May Whitty, Warren Clarke, Colm Meaney, and Suriya.