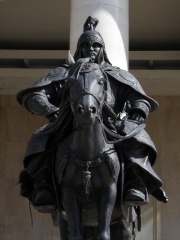 Bo'orchu (Mongolian: Боорчи, Boorchi) was one of the first and most loyal of Genghis Khan's friends and allies. He first met Genghis Khan as a boy. At that time, Genghis Khan (then Temujin) was looking for his stolen horses. Read more on Wikipedia

Since 2007, the English Wikipedia page of Bo'orchu has received more than 58,986 page views. His biography is available in 15 different languages on Wikipedia. Bo'orchu is the 442nd most popular military personnel.

Bo'orchu is most famous for his victory over the king of the Hittites, Muwatalli II, in the Battle of Kadesh.

Page views of Bo'orchus by language

Among people born in 1159, Bo'orchu ranks 2. Before him is Minamoto no Yoshitsune.