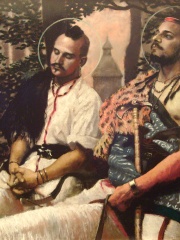 Bleda () was a Hunnic ruler, the brother of Attila the Hun.As nephews to Rugila, Attila and his elder brother Bleda succeeded him to the throne. Bleda's reign lasted for eleven years until his death. While it has been speculated by Jordanes that Attila murdered him on a hunting trip, it is unknown exactly how he died. Read more on Wikipedia

Bleda is most famous for being the king of the Huns in the 5th century.

Page views of Bledas by language

Among politicians, Bleda ranks 1,510 out of 15,710. Before him are Tvrtko I of Bosnia, Phryne, Romanos III Argyros, Manuel Azaña, Al-Mahdi, and Princess Stéphanie of Belgium. After him are Conradin, Andrey Vyshinsky, Chenghua Emperor, Emmanuel Macron, Léon Blum, and John II of Castile.