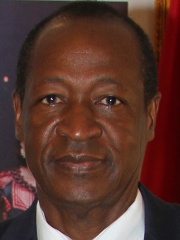 Blaise Compaoré (born 3 February 1951) is a Burkinabé politician who was president of Burkina Faso from 1987 to 2014. He was a top associate of President Thomas Sankara during the 1980s, and in October 1987, he led a coup d'état during which Sankara was killed. Subsequently, he introduced a policy of "rectification", overturning the leftist and Third Worldist policies pursued by Sankara. Read more on Wikipedia

Among politicians, Blaise Compaoré ranks 5,298 out of 15,710. Before him are Park Won-soon, Gyula Andrássy the Younger, Shamash-shum-ukin, Gisela of Swabia, Odo I, Duke of Burgundy, and Viktor Abakumov. After him are Otto Meissner, Archidamus III, Kondō Isami, Ibbi-Sin, Prince Christopher of Greece and Denmark, and Kurt Huber.

Others born in Burkina Faso

Among POLITICIANS In Burkina Faso