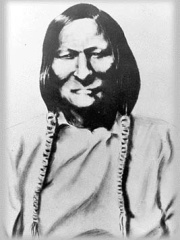 Black Kettle (Cheyenne: Mo'ohtavetoo'o) (c. 1803 – November 27, 1868) was a prominent leader of the Southern Cheyenne during the American Indian Wars. Born to the Northern Só'taeo'o / Só'taétaneo'o band of the Northern Cheyenne in the Black Hills of present-day South Dakota, he later married into the Wotápio / Wutapai band (one mixed Cheyenne-Kiowa band with Lakota Sioux origin) of the Southern Cheyenne. Black Kettle is often remembered as a peacemaker who accepted treaties with the U.S. Read more on Wikipedia

Since 2007, the English Wikipedia page of Black Kettle has received more than 258,452 page views. Her biography is available in 15 different languages on Wikipedia making her the 11,484th most popular politician.