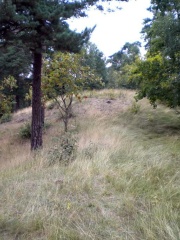 Björn Ironside (Old Norse: Bjǫrn Járnsíða; Icelandic: Björn Járnsíða; Swedish: Björn Järnsida; Danish: Bjørn Jernside; Medieval Latin: Bier Costae ferreae) was a Norse Viking chief and legendary king of Sweden. According to the 12th- and 13th-century Scandinavian histories, he was the son of the notorious and historically dubious Viking king Ragnar Lodbrok. He lived in the 9th century, being securely dated between 855 and 858. Read more on Wikipedia

Since 2007, the English Wikipedia page of Björn Ironside has received more than 6,510,790 page views. His biography is available in 26 different languages on Wikipedia making him the 365th most popular politician.

Among politicians, Björn Ironside ranks 362 out of 14,801. Before him are Nerva, Galerius, Erich Honecker, Jacques Chirac, Miklós Horthy, and Louis Bonaparte. After him are Mahmud I, Radovan Karadžić, John Hunyadi, Kangxi Emperor, Gustaf VI Adolf of Sweden, and Barack Obama.