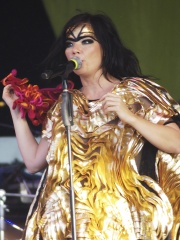 Björk Guðmundsdóttir ( BYURK; Icelandic: [pjœr̥k ˈkvʏðmʏntsˌtouhtɪr̥] (listen); born 21 November 1965) is an Icelandic singer, songwriter, composer, record producer and actress. Over her four-decade career, she has developed an eclectic musical style that draws on influences and genres including electronic, pop, jazz, experimental, trip hop, alternative, classical, and avant-garde music. Born and raised in Reykjavík, Björk began her music career at the age of 11 and gained international recognition as the lead singer of the alternative rock band the Sugarcubes. Read more on Wikipedia

Since 2007, the English Wikipedia page of Björk has received more than 10,422,523 page views. Her biography is available in 88 different languages on Wikipedia (up from 83 in 2019). Björk is the 158th most popular musician (up from 167th in 2019), the 7th most popular biography from Iceland and the most popular Icelander Musician.

Björk is most famous for her eclectic musical style, which incorporates elements of classical, jazz, and electronic music. Björk's vocal range is mezzo-soprano.

Page views of Björks by language

Among MUSICIANS In Iceland