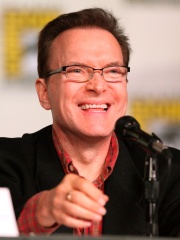 William Richard Werstine (born April 16, 1952), known professionally as Billy West, is an American voice actor, musician, singer and songwriter. He is well known for his voice-work in commercials, films, television series and video games. His roles include the title characters on Doug (Nickelodeon series) and The Ren & Stimpy Show (the former since season 3), and Philip J. Fry, Professor Farnsworth, Dr. Read more on Wikipedia

Since 2007, the English Wikipedia page of Billy West has received more than 2,055,663 page views. His biography is available in 27 different languages on Wikipedia making him the 5,733rd most popular actor.

Among actors, Billy West ranks 5,695 out of 8,832. Before him are Thomas Middleditch, Adam Garcia, Emma Samms, David Burtka, Willa Holland, and Ann B. Davis. After him are Bonnie Somerville, Martin Milner, Padmini, Priscilla Dean, Jamie Lynn Spears, and Marguerite MacIntyre.