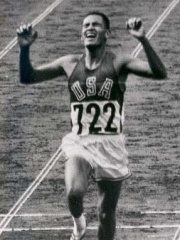 William Mervin Mills (born June 30, 1938), also known as Tamakoce Te'Hila, is an Oglala Lakota former track and field athlete who won a gold medal in the 10,000 meter run (6.2 mi) at the 1964 Tokyo Olympics. His 1964 victory is considered one of the greatest Olympic upsets because he was a virtual unknown going into the event. He was the first non-European to win the Olympic event and remains the only winner from the Americas. Read more on Wikipedia

Since 2007, the English Wikipedia page of Billy Mills has received more than 360,195 page views. His biography is available in 23 different languages on Wikipedia making him the 594th most popular athlete.