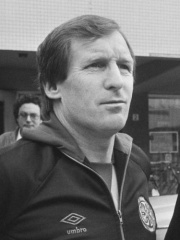 William McNeill (2 March 1940 – 22 April 2019) was a Scottish football player and manager. He had a long association with Celtic, spanning more than sixty years as a player, manager and club ambassador. McNeill captained Celtic's 'Lisbon Lions' to their European Cup victory in 1967 and later spent two spells as the club's manager. Read more on Wikipedia

Since 2007, the English Wikipedia page of Billy McNeill has received more than 534,425 page views. His biography is available in 21 different languages on Wikipedia making him the 2,190th most popular soccer player.