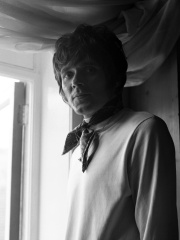 Ronald Wycherley (17 April 1940 – 28 January 1983), better known as Billy Fury, was an English singer, musician, songwriter, and actor. An early star of both rock and roll and films, he equalled the Beatles' record of 24 hits in the 1960s and spent 332 weeks on the UK chart, though he never had a chart-topping single or album.AllMusic journalist Bruce Eder stated that Fury's "mix of rough-hewn good looks and unassuming masculinity, coupled with an underlying vulnerability, all presented with a good voice and some serious musical talent, helped turn [him] into a major rock and roll star in short order". Read more on Wikipedia

Among singers, Billy Fury ranks 1,623 out of 3,541. Before her are Nelson Eddy, Jan Peerce, Eddie Money, Irma Thomas, Raekwon, and Joey Belladonna. After her are Tones and I, Ol' Dirty Bastard, Alesha Dixon, Rakim, Redfoo, and Benjamin Biolay.