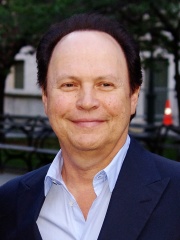 William Edward Crystal (born March 14, 1948) is an American actor, comedian, director, producer, writer and television host. He gained prominence in the 1970s and 1980s for television roles as Jodie Dallas on the ABC sitcom Soap and as a cast member and frequent host of Saturday Night Live. Crystal then became a Hollywood film star during the late 1980s and 1990s, appearing in the critical and box office successes Rabbit Test (1978), Running Scared (1986), The Princess Bride (1987), Throw Momma from the Train (1987), Memories of Me (1988), When Harry Met Sally... Read more on Wikipedia

Among actors, Billy Crystal ranks 964 out of 10,030. Before him are Michael Fassbender, Richard Jenkins, Anna May Wong, Cüneyt Arkın, Andie MacDowell, and Anita Pallenberg. After him are Kelly Lynch, Carrie-Anne Moss, Florinda Bolkan, Michel Serrault, Michael Dudikoff, and Tatsuya Nakadai.