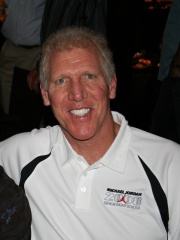 William Theodore Walton III (born November 5, 1952) is an American former basketball player who is a television sportscaster. Walton played for John Wooden and the UCLA Bruins, winning three successive National college player of the year awards (1972–1974), while leading UCLA to NCAA championships in 1972 and 1973 and an 88-game winning streak. After being selected as the first overall pick in the 1974 NBA draft, Walton led the Portland Trail Blazers to the NBA Championship in 1977, earning the NBA Finals Most Valuable Player Award that season. Read more on Wikipedia

Since 2007, the English Wikipedia page of Bill Walton has received more than 3,374,734 page views. His biography is available in 27 different languages on Wikipedia making him the 104th most popular basketball player.