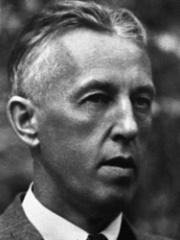 William Griffith Wilson (November 26, 1895 – January 24, 1971), also known as Bill Wilson or Bill W., was the co-founder of Alcoholics Anonymous (AA). AA is an international mutual aid fellowship with about 2 million members worldwide belonging to approximately 10,000 groups, associations, organizations, cooperatives, and fellowships of alcoholics helping other alcoholics achieve and maintain sobriety. Following AA's Twelfth Tradition of anonymity, Wilson is commonly known as "Bill W." or "Bill." In order to communicate among one another, members of "AA" will often ask those who appear to be suffering or having a relapse from alcoholism if they are "friends of Bill". Read more on Wikipedia

Since 2007, the English Wikipedia page of Bill W. has received more than 1,128,007 page views. Her biography is available in 16 different languages on Wikipedia making her the 1,433rd most popular religious figure.

Among religious figures, Bill W. ranks 1,426 out of 2,001. Before her are Anuruddha, François-Joachim de Pierre de Bernis, Clodoald, Charles Lwanga, Caspar Schwenckfeld, and Julian of Norwich. After her are Adrianus Johannes Simonis, Stephen I of Constantinople, Ellen Church, Michael the Syrian, Annie Chapman, and Friedrich Wetter.