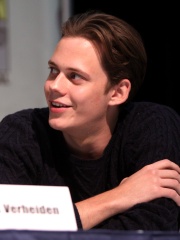 Bill Istvan Günther Skarsgård (Swedish pronunciation: [ˈbɪlː ˈskɑ̌ːʂɡoːɖ] (listen); born 9 August 1990) is a Swedish actor. He portrayed Pennywise the Dancing Clown in the supernatural horror films It (2017) and It Chapter Two (2019), based on Stephen King's novel of the same name, and appeared in the comedy Simple Simon (2010), the dystopian thriller The Divergent Series: Allegiant (2016), the espionage thriller Atomic Blonde (2017), and the comedy-horror Villains (2019). Read more on Wikipedia

Since 2007, the English Wikipedia page of Bill Skarsgård has received more than 13,902,116 page views. His biography is available in 31 different languages on Wikipedia making him the 4,510th most popular actor.