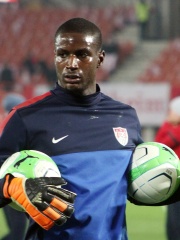 Bilal "Bill" Abdul Hamid ( hə-MEED; born November 25, 1990) is an American soccer player who plays as a goalkeeper for D.C. United in Major League Soccer. Born in Annandale, Virginia, Hamid was the first D.C. United Academy player to sign for the first team in September 2009. He made his professional debut in May 2010 as the youngest goalkeeper to win a game in Major League Soccer history. Hamid totalled 200 games for D.C. Read more on Wikipedia

Since 2007, the English Wikipedia page of Bill Hamid has received more than 358,221 page views. His biography is available in 15 different languages on Wikipedia making him the 12,099th most popular soccer player.