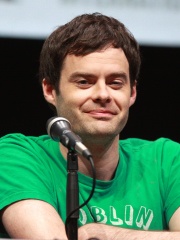 Bill Hader (born June 7, 1978) is an American actor, comedian, writer, producer, and director. He is best known for creating, producing, writing, occasionally directing, and starring in the HBO dark comedy series Barry (2018–present), for which he has received two Emmy Awards for Outstanding Lead Actor in a Comedy Series and consecutive nominations for Outstanding Comedy Series, Outstanding Directing for a Comedy Series, and Outstanding Writing for a Comedy Series for both of its first two seasons.Hader initially rose to fame for his eight-year stint (2005–2013) as a cast member on the long-running NBC variety series Saturday Night Live, for which he received four Emmy Award nominations and a Peabody Award. He became known for his impressions and especially for his work on the Weekend Update segments, in which he played Stefon Meyers, a flamboyant New York tour guide who recommends unusual nightclubs and parties with bizarre characters and specific tastes. Read more on Wikipedia

Since 2007, the English Wikipedia page of Bill Hader has received more than 10,225,749 page views. His biography is available in 32 different languages on Wikipedia making him the 5,619th most popular actor.