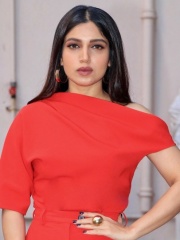 Bhumi Pednekar (born 18 July 1989) is an Indian actress who appears in Hindi films. After working as an assistant casting director at Yash Raj Films for six years, she made her film debut as an overweight bride in the company's romantic comedy Dum Laga Ke Haisha (2015), which earned her the Filmfare Award for Best Female Debut. Pednekar rose to prominence by playing headstrong small-town women in the comedy-dramas Toilet: Ek Prem Katha (2017), Shubh Mangal Saavdhan (2017), Bala (2019), and Pati Patni Aur Woh (2019). Read more on Wikipedia

Since 2007, the English Wikipedia page of Bhumi Pednekar has received more than 4,590,805 page views. Her biography is available in 15 different languages on Wikipedia making her the 8,783rd most popular actor.