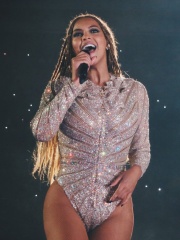 Beyoncé Giselle Knowles-Carter ( bee-YON-say; née Knowles; born September 4, 1981) is an American singer, songwriter, and actress. Beyoncé performed in various singing and dancing competitions as a child. She rose to fame in the late 1990s as the lead singer of Destiny's Child, one of the best-selling girl groups of all time. Read more on Wikipedia

Page views of Beyoncé by language

Among singers, Beyoncé ranks 283 out of 3,541. Before her are Kanye West, Christina Aguilera, Rod Evans, Selena Gomez, Corry Brokken, and Anastacia. After her are Selena, Dusty Springfield, Asmahan, Renata Scotto, Vicente Fernández, and Cab Calloway.