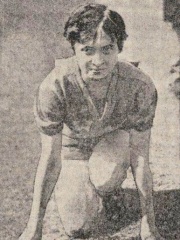 Elizabeth R. Schwartz (née Robinson; August 23, 1911 – May 18, 1999) was an American athlete and winner of the first Olympic 100 m for women.Robinson was born in Riverdale, Illinois, and was a student at Thornton Township High School when she achieved national acclaim as an Olympic champion. Robinson ran her first official race on March 30, 1928, at the age of 16, an indoor meet where she finished second to Helen Filkey in the 60-yard dash. At her next race, outdoors at 100 meters, she equalled the world record, though her time was not recognized because it was deemed wind-aided.At the Amsterdam Olympics, her third 100 m competition, Robinson reached the final and won, equalling the world record. Read more on Wikipedia

Since 2007, the English Wikipedia page of Betty Robinson has received more than 204,665 page views. Her biography is available in 21 different languages on Wikipedia making her the 68th most popular athlete.