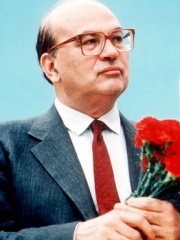 Benedetto "Bettino" Craxi (UK: KRAK-see, Italian: [betˈtiːno ˈkraksi], Sicilian: [ˈkɾaʃʃɪ]; 24 February 1934 – 19 January 2000) was an Italian politician, leader of the Italian Socialist Party from 1976 to 1993 and the 45th prime minister of Italy from 1983 to 1987. He was the first Italian Socialist Party member to become prime minister and the third from a socialist party to hold the office. He led the third-longest government in the Italian Republic and he is considered one of the most powerful and prominent politicians of the so-called First Republic.Craxi was involved in investigations conducted by Mani Pulite judges in Milan, eventually being convicted for corruption and illicit financing of the PSI. He always rejected the charges of corruption while admitting to the illegal funding which permitted costly political activity, the PSI being less financially powerful than the two larger parties, Christian Democracy and the Communists. Read more on Wikipedia

Among politicians, Bettino Craxi ranks 3,584 out of 15,577. Before him are Izzat Ibrahim al-Douri, Emperor Wenzong of Tang, Onjo of Baekje, Aristagoras, Mundzuk, and Claudia Felicitas of Austria. After him are Abu'l-Khayr Khan, William III of Sicily, Hetepheres II, Baldwin II, Latin Emperor, Sancho VII of Navarre, and Princess Mafalda of Savoy.