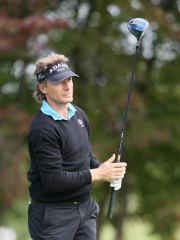 Bernhard Langer (German pronunciation: [ˈbɛʁnhaʁt ˈlaŋɐ]; born 27 August 1957) is a German professional golfer. He is a two-time Masters champion and was one of the world's leading golfers throughout the 1980s and 1990s. In 1986, he became the sport's first official number one ranked player following the creation of the OWGR. Langer is one of five golfers who have won professional golf events on all six continents where golf is played. Read more on Wikipedia

Since 2007, the English Wikipedia page of Bernhard Langer has received more than 1,058,248 page views. His biography is available in 19 different languages on Wikipedia making him the 6th most popular golfer.

Among GOLFERS In Germany

Among golfers born in Germany, Bernhard Langer ranks 1. After him are Martin Kaymer (1984).