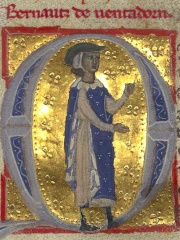 Bernart de Ventadorn (also Bernard de Ventadour or Bernat del Ventadorn; 1135–1194) was a prominent troubadour of the classical age of troubadour poetry. Now thought of as "the Master Singer" he developed the cançons into a more formalized style which allowed for sudden turns. He is remembered for his mastery as well as popularisation of the trobar leu style, and for his prolific cançons, which helped define the genre and establish the "classical" form of courtly love poetry, to be imitated and reproduced throughout the remaining century and a half of troubadour activity.Bernart was known for being able to portray his women as divine agents in one moment and then, in a sudden twist, as Eve – the cause of man's initial sin. Read more on Wikipedia

Bernart de Ventadorn is most famous for his poetry. He is considered the first troubadour and was a major influence on the development of the troubadour tradition.

Among people born in 1135, Bernart de Ventadorn ranks 4. Before him are Chrétien de Troyes, Léonin, and Joachim of Fiore. After him are Inge I of Norway, Joscelin III, Count of Edessa, Walter of Châtillon, and Sharaf al-Dīn al-Ṭūsī. Among people deceased in 1190, Bernart de Ventadorn ranks 3. Before him are Frederick I, Holy Roman Emperor and Sibylla, Queen of Jerusalem. After him are Isabella of Hainault, Otto II, Margrave of Meissen, Floris III, Count of Holland, Saigyō, Maria Komnene, Queen of Hungary, Godfrey III, Count of Louvain, Anvari, Dominicus Gundissalinus, and William of Newburgh.