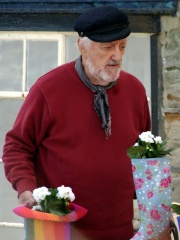 Bernard Joseph Cribbins (29 December 1928 – 27 July 2022) was an English actor and singer whose career spanned more than seven decades.During the 1960s, Cribbins became known in the UK for his successful novelty records "The Hole in the Ground" and "Right Said Fred" and for his appearances in comedy films including Two-Way Stretch (1960) and the Carry On series. His other screen roles include the astronaut Vincent Mountjoy in The Mouse on the Moon (1963), Albert Perks in The Railway Children (1970), the barman Felix Forsythe in Alfred Hitchcock's Frenzy (1972) and the pretentious hotel guest Mr Hutchinson in the Fawlty Towers episode "The Hotel Inspectors" (1975). Read more on Wikipedia