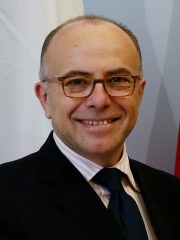 Bernard Guy Georges Cazeneuve (French pronunciation: ​[bɛʁnaʁ kaznøv]; born 2 June 1963) is a French politician and lawyer who served as Prime Minister of France from 6 December 2016 to 15 May 2017. A member of the Socialist Party, he represented Manche’s 5th constituency in the National Assembly from 1997 to 2002 and again from 2007 to 2012. He was Mayor of Cherbourg-Octeville from 2001 to 2012. Read more on Wikipedia

Among politicians, Bernard Cazeneuve ranks 11,242 out of 15,710. Before him are Jules Renkin, Patrick Hillery, Peter Pellegrini, Hiempsal I, Áedán mac Gabráin, and Piotr Jaroszewicz. After him are Per Borten, Robert Menzies, Bruce Rauner, Jacob Hübner, Nikola Kljusev, and Khin Nyunt.