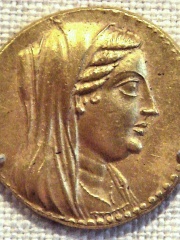 Berenice II Euergetis (267 or 266 BC – 221 BC; Greek: Βερενίκη Ευεργέτις, Berenikē Euergetis, "Berenice the Benefactress") was queen regnant of Cyrenaica from 258 BC to 246 BC and co-regent queen of Ptolemaic Egypt from 246 BC to 222 BC as the wife of Ptolemy III. She married Demetrius, thus giving him the throne of Cyrenaica, on the death of her father Magas in 250/249 BC. After a short power struggle with her mother, Berenice married her half-cousin Ptolemy III, the third ruler of the Ptolemaic kingdom. This marriage led to the re-incorporation of Cyrenaica into the Ptolemaic empire. As queen of Egypt, Berenice participated actively in government, was incorporated into the Ptolemaic state cult alongside her husband and worshipped as a goddess in her own right. Read more on Wikipedia

Berenice II was the wife of Ptolemy III, and she is most famous for her hair. Her hair was so long that it reached the ground.

Page views of Berenice II of Egypts by language

Among companions, Berenice II of Egypt ranks 208 out of 673. Before her are Eleanor of Aragon, Queen of Portugal, Elizabeth Stuart, Queen of Bohemia, Julia, Asiya, Fredegund, and Blanche of Burgundy. After her are Elisabeth Christine of Brunswick-Wolfenbüttel-Bevern, Maria Antonia Ferdinanda of Spain, Elizabeth of Austria, Sophia Dorothea of Celle, Constance of Austria, and Eleanor of England, Queen of Castile.

Others Deceased in 221 BC

Among COMPANIONS In Libya

Among companions born in Libya, Berenice II of Egypt ranks 1.