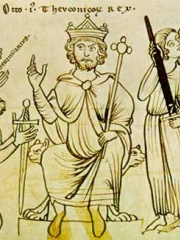 Berengar II (c. 900 – 4 August 966) was the King of Italy from 950 until his deposition in 961. He was a scion of the Anscarid and Unruoching dynasties, and was named after his maternal grandfather, Berengar I. He succeeded his father as Margrave of Ivrea around 923 (whence he is often known as Berengar of Ivrea), and after 940 led the aristocratic opposition to Kings Hugh and Lothair II. In 950 he succeeded the latter and had his son, Adalbert crowned as his co-ruler. Read more on Wikipedia

Berengar II of Italy is most famous for his involvement in the Investiture Controversy, which was a dispute over who had the right to appoint bishops.

Page views of Berengar II of Italies by language

Among politicians, Berengar II of Italy ranks 2,359 out of 15,710. Before him are Fumimaro Konoe, Mohammad Ali Shah Qajar, Benazir Bhutto, Simone Veil, Theobald von Bethmann-Hollweg, and Princess Louise Auguste of Denmark. After him are Robert I, Duke of Parma, Birger Jarl, Louis I, Duke of Anjou, Günter Schabowski, Prokopis Pavlopoulos, and John of Saxony.

Among people born in 900, Berengar II of Italy ranks 13. Before him are Pope Benedict VI, Pope Agapetus II, Pope Stephen VIII, Pope Leo VII, Ahmad ibn Fadlan, and Robert the Strong. After him are Pope Leo VIII, Guy III of Spoleto, Zoe Karbonopsina, Ohthere of Hålogaland, Antipope Christopher, and Banū Mūsā. Among people deceased in 966, Berengar II of Italy ranks 1. After him are Sancho I of León, Ibrahim ibn Yaqub, Flodoard, and Robert of Vermandois.