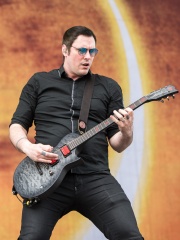 Benjamin Jackson Burnley IV (born March 10, 1978) is an American musician, singer, songwriter, and record producer, best known as the founder and frontman of the American rock band Breaking Benjamin. As the sole constant of the group, Burnley has served as its principal songwriter, lead vocalist, and guitarist since its inception in 1999. Since signing with Hollywood Records in 2002, Burnley has composed six studio albums under the name Breaking Benjamin, three of which have reached platinum and two of which have reached gold in the United States. Read more on Wikipedia

Since 2007, the English Wikipedia page of Benjamin Burnley has received more than 1,158,003 page views. His biography is available in 17 different languages on Wikipedia making him the 2,221st most popular musician.

Among musicians, Benjamin Burnley ranks 2,226 out of 2,258. Before him are Flume, Agnete Johnsen, Ty Segall, Danja, Vitamin C, and Miri Ben-Ari. After him are Chantal Kreviazuk, Jeremy Davis, Lissie, Ezra Koenig, Jonathan Coulton, and Matoma.