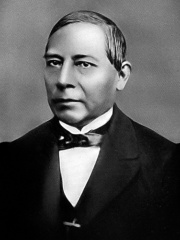 Benito Pablo Juárez García (Spanish: [beˈnito ˈpaβlo ˈxwaɾes gaɾˈsi.a] (listen); 21 March 1806 – 18 July 1872) was a Mexican lawyer and politician, who served as the 26th president of Mexico from 1858 until his death in 1872. He was the first president of Mexico who was of indigenous origin. Born in Oaxaca to a poor Zapotec rural family and orphaned when he was young, he moved to Oaxaca City at the age of 12 to go to school. Read more on Wikipedia

Benito Juárez was a Mexican lawyer and politician who served as president of Mexico from 1858 to 1872. He is most famous for his efforts to establish a democracy in Mexico, which was ruled by military dictatorships for much of the 19th century.

Among politicians, Benito Juárez ranks 2,011 out of 15,710. Before him are Gianni Agnelli, Ludvík Svoboda, Jeroboam II, Danjong of Joseon, Boniface I, Marquess of Montferrat, and Haggai. After him are Theuderic III, Arthur Balfour, Rupert, King of Germany, Viriathus, Nicias, and Julius Martov.