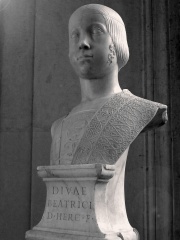 Beatrice d'Este (29 June 1475 – 3 January 1497), was duchess of Bari and Milan by marriage to Ludovico Sforza (known as "il Moro"). She was reputed as one of the most beautiful and accomplished princesses of the Italian Renaissance. Read more on Wikipedia

Beatrice d'este was a noblewoman and the wife of Francesco II, Duke of Milan. She is most famous for her correspondence with the poet Dante Alighieri.

Among noblemen, Beatrice d'Este ranks 205 out of 843. Before her are Frederik, Crown Prince of Denmark, Stéphanie de Beauharnais, Isabel, Princess Imperial of Brazil, Ingegerd Olofsdotter of Sweden, Leotychidas, and Louise Marie Adélaïde de Bourbon, Duchess of Orléans. After her are Elizabeth Boleyn, Countess of Wiltshire, Duchess Marie of Mecklenburg-Schwerin, Prince William, Duke of Cambridge, Claude, Duke of Guise, Edward of Middleham, Prince of Wales, and Sigismund, Archduke of Austria.