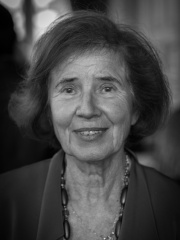 Beate Auguste Klarsfeld (née Künzel; born 13 February 1939) is a Franco-German journalist and Nazi hunter who, along with her French husband, Serge, became famous for their investigation and documentation of numerous Nazi war criminals, including Kurt Lischka, Alois Brunner, Klaus Barbie, Ernst Ehlers and Kurt Asche. In March 2012, she ran as the candidate for The Left in the 2012 German presidential election against Joachim Gauck, but lost by 126 to 991. Read more on Wikipedia

Beate Klarsfeld is a German-born French activist who became famous for her involvement in the 1960s and 1970s in the campaign to bring Nazi war criminals to justice.

Among JOURNALISTS In Germany