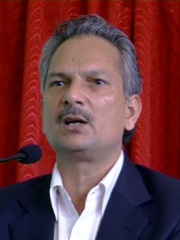 Baburam Bhattarai (Nepali: बाबुराम भट्टराई, pronounced [ˈbaburam ˈbʱʌʈːʌrai̯] (born 18 June 1954) is a Nepalese politician and federal Chairman of Janta Samajbadi party who was Prime Minister of Nepal from August 2011 to March 2013. He was a long-time leading member of the Unified Communist Party of Nepal (Maoist) prior to founding a new party, Naya Shakti. In 1996 the Maoists started the Nepalese Civil War, which had a huge impact on the political system in Nepal. Read more on Wikipedia

Since 2007, the English Wikipedia page of Baburam Bhattarai has received more than 195,783 page views. His biography is available in 22 different languages on Wikipedia making him the 13,651st most popular politician.

Among POLITICIANS In Nepal