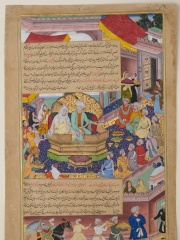 Börte (simply Borte, also Börte Üjin; Cyrillic: Бөртэ үжин; c. 1161–1230) was the first wife of Temüjin, who became Genghis Khan, the founder of the Mongol Empire. Börte became the head of the first Court of Genghis Khan, and Grand Empress of his Empire. Read more on Wikipedia

Börte is a type of handwoven fabric that is most famous for its use in the traditional dress of the nomadic Kazakh people.

Page views of Börtes by language

Among people born in 1161, Börte ranks 2. Before her is Baldwin IV of Jerusalem. After her are Emperor Takakura, Constance, Duchess of Brittany, and Sancho, Count of Provence. Among people deceased in 1230, Börte ranks 1. After her are Pérotin, Walther von der Vogelweide, Berengaria of Navarre, Ottokar I of Bohemia, Alfonso IX of León, Leopold VI, Duke of Austria, Pelagio Galvani, Margaret, Countess of Blois, Pietro Ziani, Benedetto Antelami, and Samuel ibn Tibbon.