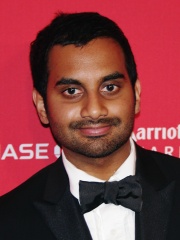 Aziz Ismail Ansari (; born February 23, 1983) is an American actor, writer, producer, director, and comedian. He is known for his role as Tom Haverford on the NBC series Parks and Recreation (2009–2015) and as creator and star of the Netflix series Master of None (2015–2017) for which he won several acting and writing awards, including two Emmys and a Golden Globe, which was the first award received by an Asian American actor for acting on television.Ansari began performing comedy in New York City while a student at New York University in 2000. Read more on Wikipedia

Since 2007, the English Wikipedia page of Aziz Ansari has received more than 9,470,162 page views. His biography is available in 30 different languages on Wikipedia making him the 7,555th most popular comedian.

Among comedians, Aziz Ansari ranks 83 out of 8. Before him are Chris O'Dowd, Steven Wright, Kristen Schaal, Dane Cook, Bill Burr, and B. J. Novak. After him are Chelsea Handler, Nick Kroll, Mitch Hedberg, Kenan Thompson, Ralphie May, and Carrie Brownstein.