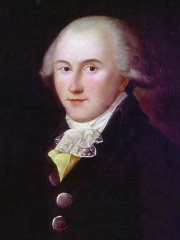 Augustin Bon Joseph de Robespierre (21 January 1763 – 28 July 1794), known as Robespierre the Younger, was a French lawyer, politician and the younger brother of French Revolutionary leader Maximilien Robespierre. His political views were similar to his brother's. Read more on Wikipedia

Robespierre was a French lawyer and politician who helped to overthrow the French monarchy and establish the French republic. He is most famous for being the architect of the Reign of Terror, a period of violence in which more than 17,000 people were executed.

Among politicians, Augustin Robespierre ranks 3,265 out of 15,577. Before him are Marie of Luxembourg, Queen of France, Mohammed Alim Khan, Liu Bian, Catherine of Austria, Queen of Poland, Zaifeng, Prince Chun, and Thorismund. After him are Ladislaus III of Hungary, L'Inconnue de la Seine, Publius Cornelius Dolabella, Charles Felix of Sardinia, Henry FitzRoy, 1st Duke of Richmond and Somerset, and Wilfred the Hairy.