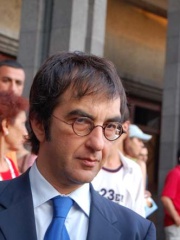 Atom Egoyan (; Armenian: Աթոմ Եղոյեան, romanized: Atom Yeghoyan; born July 19, 1960) is a Canadian filmmaker. He was part of a loosely-affiliated group of filmmakers to emerge in the 1980s from Toronto known as the Toronto New Wave. Egoyan made his career breakthrough with Exotica (1994), a film set primarily in and around the fictional Exotica strip club. Read more on Wikipedia

Since 2007, the English Wikipedia page of Atom Egoyan has received more than 806,164 page views. His biography is available in 37 different languages on Wikipedia. Atom Egoyan is the 701st most popular film director (down from 531st in 2019), the 393rd most popular biography from Egypt (down from 324th in 2019) and the 4th most popular Egyptian Film Director.

Among FILM DIRECTORS In Egypt