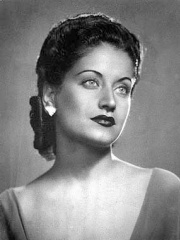 Amal al-Atrash (Arabic: آمال الأطرش Āmāl al-Aṭrash, North Levantine Arabic pronunciation: [(ʔ)æːmæːl lˈ(ʔ)ætˤrɑʃ]; November 25, 1912 – July 14, 1944), better known by her stage name Asmahan (أسمهان, Arabic pronunciation: [ʔasmahaːn] Asmahān), was a Syrian singer.Having immigrated to Egypt at the age of three years old, her family knew the composer Dawood Hosni, and she sang the compositions of Mohamed El Qasabgi and Zakariyya Ahmad. She also sang the compositions of Mohammed Abdel Wahab and her brother Farid al-Atrash, a then rising star musician in his own right. Her voice was one of the few female voices in Arab music world to pose serious competition to that of Umm Kulthum, who is considered to be one of the Arab world's most distinguished singers of the 20th century. Read more on Wikipedia

Since 2007, the English Wikipedia page of Asmahan has received more than 403,277 page views. Her biography is available in 17 different languages on Wikipedia. Asmahan is the 286th most popular singer (up from 296th in 2019).

Page views of Asmahans by language

Among singers, Asmahan ranks 286 out of 3,541. Before her are Selena Gomez, Corry Brokken, Anastacia, Beyoncé, Selena, and Dusty Springfield. After her are Renata Scotto, Vicente Fernández, Cab Calloway, Antonio Cesti, Wolf Biermann, and Alfredo Kraus.