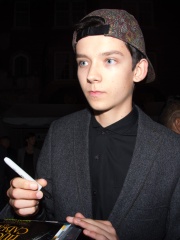 Asa Maxwell Thornton Farr Butterfield (; born 1 April 1997) is a British actor. He became known for playing the main character Bruno in the Holocaust film The Boy in the Striped Pyjamas (2008), for which he received nominations for the British Independent Film Award and the London Film Critics Circle Award for Young British Performer of the Year at the age of 11. For his leading performance as Hugo Cabret in Martin Scorsese's drama Hugo (2011), Butterfield received considerable praise and was awarded the Young Hollywood Award for Breakthrough Performance—Male and was nominated for the Critics' Choice Movie Award for Best Young Performer and the Empire Award for Best Male Newcomer, among other accolades. Read more on Wikipedia

Since 2007, the English Wikipedia page of Asa Butterfield has received more than 9,000,394 page views. His biography is available in 41 different languages on Wikipedia making him the 3,976th most popular actor.