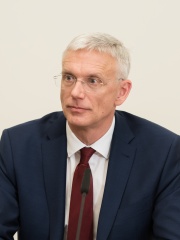 Arturs Krišjānis Kariņš (born 13 December 1964) is an American-born Latvian politician, linguist, and businessperson who has served as Minister of Economics, a Member of the European Parliament, and is currently the Prime Minister of Latvia. Born in Wilmington, Delaware, United States, to parents who had left Latvia during the Soviet occupation, he was active in the American Latvian community throughout his youth.After completing a bachelor's degree and PhD in linguistics at the University of Pennsylvania, Kariņš moved to Latvia in 1997 and founded a frozen food business. He helped found the New Era Party in 2002, which in 2011 merged with others to form the Unity Party (renamed New Unity in 2018).After serving as a deputy in Latvia's parliament (the Saeima), as Minister of Economics, and also as a Member of the European Parliament throughout the 2000s and 2010s, Kariņš was selected by New Unity to be its prime ministerial candidate in the 2018 Latvian parliamentary election. Read more on Wikipedia