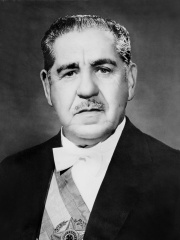 Artur da Costa e Silva (Portuguese: [aʁˈtuʁ dɐ ˈkɔstɐ i ˈsiwvɐ]; October 3, 1899 – December 17, 1969) was a Brazilian Army General and the second President of the Brazilian military government that came to power after the 1964 coup d'état. He reached the rank of Marshal of the Brazilian Army, and held the post of Minister of War in the military government of President Castelo Branco. During his term in office Institutional Act 5 was promulgated. Read more on Wikipedia

Since 2007, the English Wikipedia page of Artur da Costa e Silva has received more than 104,218 page views. His biography is available in 31 different languages on Wikipedia making him the 6,259th most popular politician.

Among politicians, Artur da Costa e Silva ranks 6,222 out of 14,801. Before him are Theodore of Corsica, Hayato Ikeda, Andries Pretorius, Adelaide of Paris, Princess Eugénie of Sweden, and Carl Adolph Agardh. After him are Raif Dizdarević, Abdal-Latif Mirza, Bohemond IV of Antioch, Princess Adelheid-Marie of Anhalt-Dessau, Otto Henry, Elector Palatine, and Ben Carson.