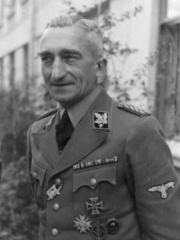 Arthur Nebe (German: [ˈaʁtuːɐ̯ ˈneːbə] (listen); 13 November 1894 – 21 March 1945) was a key functionary in the security and police apparatus of Nazi Germany and from 1941, a major perpetrator of the Holocaust. Nebe rose through the ranks of the Prussian police force to become head of Nazi Germany's Criminal Police (Kriminalpolizei; Kripo) in 1936, which was amalgamated into the Reich Security Main Office (RSHA) in 1939. Before the 1941 German invasion of the Soviet Union, Nebe volunteered to serve as the commanding officer of Einsatzgruppe B, one of the four mobile death squads of the SS. The unit was deployed in the Army Group Centre Rear Area, in modern-day Belarus, and reported over 45,000 victims by November 1941. In late 1941, Nebe was posted back to Berlin and resumed his career with the RSHA. Read more on Wikipedia

Arthur Nebe was a German Nazi SS-Obersturmbannführer (lieutenant colonel) and Gestapo officer. He was the commanding officer of Einsatzgruppe B, which was responsible for mass murder in the Baltic states, Belarus, and Ukraine. He was also the head of the Gestapo in Berlin and was involved in the 20 July Plot to assassinate Adolf Hitler.