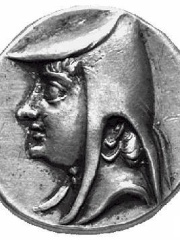 Arsaces I of Parthia

Arsaces I (; from Greek: Ἀρσάκης; in Parthian: 𐭀𐭓𐭔𐭊 Aršak, Persian: اشک‎ Ašk) was the first king of Parthia, as well as the founder and eponym of the Arsacid dynasty of Parthia, ruling from 247 BC to 217 BC. The leader of the Parni, one of the three tribes of the Dahae confederacy, Arsaces founded his dynasty in the mid-3rd century BC when he conquered the satrapy of Parthia (now shared between Turkmenistan and Iran) from Andragoras, who had rebelled against the Seleucid Empire. He spent the rest of his reign consolidating his rule in the region, and successfully stopped the Seleucid efforts to reconquer Parthia. Due to Arsaces' achievements, he became a popular figure amongst the Arsacid monarchs, who used his name as a royal honorific. Read more on Wikipedia

Arsaces I of Parthia was most famous for his military conquests and for being the first Parthian king to mint coins.

Page views of Arsaces I of Parthias by language

Among politicians, Arsaces I of Parthia ranks 3,524 out of 15,710. Before him are Urukagina, Hayme Hatun, Henry II, Duke of Austria, Harvey Milk, Plaek Phibunsongkhram, and Sun Xiu. After him are Niceto Alcalá-Zamora, Sigeric, Liu Bian, Louis V, Duke of Bavaria, Emperor Ku, and Ferdinand II of León.

Others Deceased in 217 BC