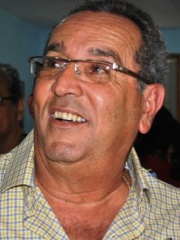 José Arnoldo Alemán Lacayo (born 23 January 1946) is a Nicaraguan politician who served as the 81st President of Nicaragua from 10 January 1997 to 10 January 2002. In 2003, he was convicted of corruption and sentenced to a 20-year prison term, and Transparency International named him the ninth most corrupt leader in recent history. Read more on Wikipedia

Since 2007, the English Wikipedia page of Arnoldo Alemán has received more than 101,499 page views. His biography is available in 25 different languages on Wikipedia making him the 10,158th most popular politician.

Among politicians, Arnoldo Alemán ranks 10,107 out of 14,801. Before him are Otto Gessler, Michel Djotodia, Kadashman-Enlil I, Prince Johann Georg of Hohenzollern, Luís Carlos Prestes, and Isa Mustafa. After him are Ahmose-Sitkamose, Princess Elisabeth of Anhalt, Conrad I, Duke of Bavaria, Majid bin Said of Zanzibar, Doğu Perinçek, and Juan Bautista Alberdi.

Others born in Nicaragua

Among POLITICIANS In Nicaragua