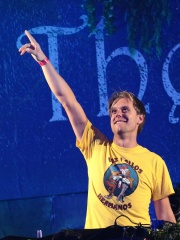 Armin Jozef Jacobus Daniël van Buuren ( van BEWR-ən, Dutch: [ˈɑrmɪn ˈjoːzəf jɑˈkoːbʏs ˈdaːniˌjɛl vɑn ˈbyːrə(n)]; born 25 December 1976) is a Dutch DJ and record producer from Leiden, South Holland. Since 2001, he has hosted A State of Trance (ASOT), a weekly radio show, which is broadcast to nearly 40 million listeners in 84 countries on over 100 FM radio stations. According to DJs and Festivals, "the radio show propelled him to stardom and helped cultivate an interest in trance music around the world."Van Buuren has won a number of accolades. Read more on Wikipedia

Since 2007, the English Wikipedia page of Armin van Buuren has received more than 2,030,899 page views. His biography is available in 51 different languages on Wikipedia making him the 303rd most popular musician.

Among MUSICIANS In Netherlands