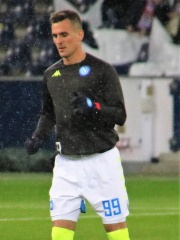 Arkadiusz Krystian Milik ([arˈkadjuʂ ˈmilik] (listen); born 28 February 1994) is a Polish professional footballer who plays as a striker for Italian club Napoli and the Poland national team. Milik began his career as a footballer in the Rozwój Katowice youth squad. In 2011, he signed a one-year contract with Górnik Zabrze, and in 2012 he transferred to Bayer Leverkusen and later played on loan for FC Augsburg and Ajax respectively. Read more on Wikipedia

Since 2007, the English Wikipedia page of Arkadiusz Milik has received more than 1,439,578 page views. His biography is available in 44 different languages on Wikipedia making him the 2,666th most popular soccer player.