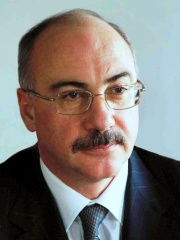 Arkadi Ghukasyan (Armenian: Արկադի Ղուկասյան, born 22 June 1957) was the second President of the self-proclaimed Nagorno-Karabakh Republic. He was elected as the President on 8 September 1997 and re-elected in 2002, until his term ended on 7 September 2007 and was succeeded by Bako Sahakyan. Born in Stepanakert, in the Nagorno Karabakh Autonomous Republic of the Azerbaijan SSR on 22 June 1957, he graduated in 1979 from Yerevan State University with a degree in linguistics. Read more on Wikipedia

Since 2007, the English Wikipedia page of Arkadi Ghukasyan has received more than 37,311 page views. His biography is available in 17 different languages on Wikipedia. Arkadi Ghukasyan is the 13,439th most popular politician (down from 12,708th in 2019).